Promote Your Page Too

fresh food nancy
I'm active at gardening, swimming and kayaking. The river runs outside my door. I grow a large portion of my own food, processing it by canning, freezing and drying. I especially love to grow heirloom varieties of veggies. I had an herb business for 35 years, and have recently retired from that to devote more time to my job as marketing director for a large grocery store/farmers market. My siblings and I had an interesting childhood. Our father was a scientist and shared his love of biology and the natural world with us while our mother shared her love of drama, reading and music. I'm very involved with independent family farm issues and spend much of my time as secretary of Missouri Farmers Union fighting CAFOS, NAIS, monopolies and especially GMOs. 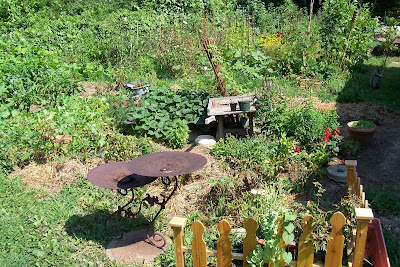 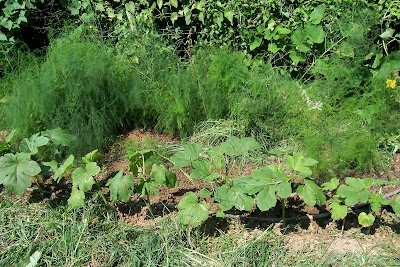 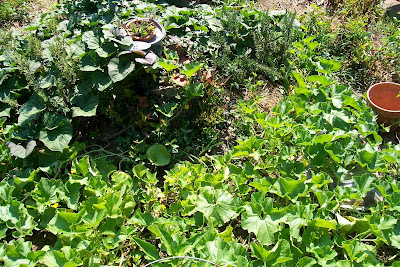 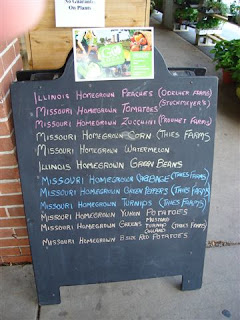 This growing season has been a mite slow getting started. First we had too much rain for farmers to get out in their fields. Then we had excruciatingly hot weather. Then we had more rain. . . . . .well, you get the idea.
But, finally, the local produce is pouring in. And it is beautiful. . . . .and tasty. . . .and the prices are cheap, cheap, cheap.
Just in case you're wondering which produce is local, there's a great blackboard at the east entrance to the store-Sappington Farmers Market-8400 Watson Road St. Louis- which tells all the local produce of the day-and usually tells the farm from where the produce came.
The local heirloom tomatoes are awesome, the corn is delicious, the green beans are outstanding. I could go on and on. Come in and see for yourself. Beautiful, juicy Brandywine tomatoes for $1.50 a pound-can't beat that.
And remember, on Thursdays, you get $10.00 off a $50.00 purchase. Download the coupon from our website.


Gardening and farming are two different things. As a retired farmer, I know how frustrating it can be to be unable to get equipment into the field. There's a panicky feeling as time marches on, and the ground is still lying fallow.
Now that I'm just a gardener, though, I found this year that I was able to turn the ground and plant everything by hand while the farmers waited for their fields to dry. The result is the prettiest garden I ever had. And I've had heirloom tomatoes to eat since mid-May. I was a little concerned that I wouldn't have enough food (I try to grow all my own veggies) this year because I didn't have hundreds of tomato plants and rows of cucumbers. I just arranged my fifteen tomato plants and my five cucumber towers and put my sweet potatoes in with some flowers and interspersed pole beans throughout the garden. Well, you just have to see for yourself.
Above are some pictures of my beautiful organic garden. And I worried for nothing. I have been putting up produce every day. It is stacked on counters, my table and anywhere I can find a spot.
I'm starting to like this kind of gardening. It's easier, prettier and just as productive. I hope you enjoy the pictures.
Posted by fresh food nancy at 6:57 PM 1 comment:

It's Not As Easy As You Think 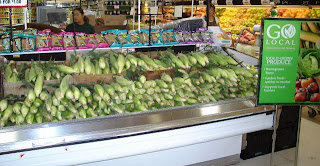 Some days I feel like I'm on a seesaw. The mission of Sappington Farmers Market is to provide healthy local foods to the consumer while providing a fair profit to the farmer. Sounds great, doesn't it? Well, it is great. But that doesn't make it easy.

Some weeks we are loaded with fresh, local produce that nobody seems to want. Then the next week, we get lots of new shoppers looking for all the produce we just had to throw away because nobody bought it. We're still trying to figure out this balancing act.

One thing I do know. When we get a really superior product like our free-range heritage chickens from Cord Jenkins or our source-verified all-natural beef from MO Best Beef Cooperative, it's going to cost more. And that's where you come in. If you're reading this, I know you're a supporter of the independent farmers who provide the great, fresh food you want to eat. Well, those farmers have a lot more costs associated with producing that fresh food than the large corporations do. None of them ask for a high profit. And neither do we. But the prices you see on these items are higher than conventional foods-or even higher than some more corporate and non-local organic items. We think there's a tremendous quality difference and that there's also a moral and philosophical issue involved. We think you agree. There's only one way to make it work. If we all want fresh, local food, we're going to have to pay for it.

In these very trying financial times, the decision of what to pay for your food, and how to prioritize your purchases is a very serious one. Let us know where you draw the line. Post on this blog or put notes in our suggestion box. I really do think we're the only store that really listens. Because we're the farmer-owned grocery store--and because all of us farmers who own the store are also consumer advocates. You can't beat that. Our goal is to provide what you want to eat. Let us know.
Posted by fresh food nancy at 11:08 AM 2 comments:

James, one Sappington's meat cutters, on a busy day. 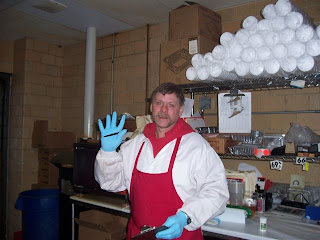 Our meatcutters cut and grind meat from individual animals. 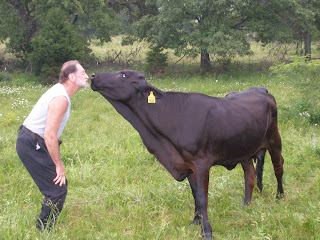 Some folks really love their animals. I think this picture proves it. Pictured is Ron McNear, one of the owners of Sappington Farmers Market and the president of MO Best Beef Cooperative.
Please note the eartag on the cow. This eartag is part of a voluntary animal id system used by Missouri's Best Beef Cooperative to protect you, the consumer.
The system works perfectly to identify every cut of meat from this coop which is sold at Sappington Farmers Market.
Although the typical pound of ground beef sold as part of the conventional meat production system in the US can contain DNA from as many as 1000 animals, a pound of ground beef bought at Sappington Farmers Market and labeled "Rancher's Best Beef" contains meat from only one animal. Our meat department receives a delivery direct from one of the MO Best farmers-in a refrigerated van. This is not boxed meat. This is a side of beef. The meat department cuts the beef into custom cuts, and grinds some of it. We know it's from one cow because that's all they've cut and ground. It is then labeled "Ranchers Best Beef" and sold from the meat case. Records are kept of the information on that animal's ear tag and that meat can be traced back to the exact animal. What are the chances that meat has e. coli contamination? Well, so far, every e. coli outbreak in the country has involved animals raised in large Confined Animal Feeding Operations and processed in one of the twelve (that's right-only twelve in the whole country) processing facilities in the USA. So, not only is Rancher's Best Beef source-identified, but the chances that a trace will ever be required are very minimal.
Recent news stories have alerted the public to the fact that almost 400,000 pounds of beef have been recalled because of e. coli contamination. To me, the really scary thing about these recalls is that you might not know where the meat you bought originated, and you might not even hear about the recall until your family has eaten the meat. Considering the very small premium on the price of "Rancher's Best", it seems hard to justify feeding your family the riskier meat.
That's not all, though. The taste of "Rancher's Best" is so much better than conventional ground beef that you won't believe your taste buds. It tastes like beef used to taste.

For the past year, I've been marketing director of Sappington Farmers Market in St. Louis, MO. I'm also one of the farmers (in my case, retired farmer and farmer/advocate) who purchased the market.
We are the only farmer-owned grocery store that I know of. I'd love to hear from you if you know of others.
Our store is a 23,500-foot neighborhood-style grocery store that specializes in produce and in local meats, cheese and dairy products as well as local produce. It's my job to let people know about that in as many creative ways as I can think of.
For the past week, I've been hosting my family reunion in my little cottage by Current River. I've had guests from St. Louis; Memphis; Oak Ridge, TN; Clinton, TN; San Antonio, TX; and upstate New York as well as Escondido, CA. My brother and his family who live near me were also with us.
I asked each of them to bring foods local to their area and I provided a plethora of our local goods, some I had grown and many of which I purchased at Sappington Farmers Market.
What a feast we all had. We started the reunion off last Wednesday night with a potato salad made with local eggs (purchased from Sappington), potatoes I grew mixed in with potatoes I purchased from Sappington, celery and onions from my garden and homemade pickle relish.
The centerpiece of that meal was smoked brisket smoked at Sappington Market. The brisket came from Missouri's Best Beef Cooperative and is sold under the label Ranchers' All-Natural Beef (one of our owners is a member of the cooperative.) We also cooked 27 ears of corn fresh from Prouhet Farms (purchased at Sappington) and had cukes from the garden and Arkansas tomatoes. (Missouri tomatoes are in at Sappington as of July 1). For dessert we had cupcakes made from zucchini and lots of chocolate.
Another night we had make-your-own pizzas, with dishes all over the table filled with organically-grown garden-fresh produce. Cheese was local to Missouri and to the states from which our guests had traveled. We had some excellent New York cheeses.
The most interactive and very local dish was a gumbo we all worked together on. My brother cooked about 15 pounds of the Missouri pond-raised shrimp we sell at Sappington and we all pitched in with shelling and deveining. In the meantime, he was busy making a roux and adding the other ingredients. I felt like I was in Louisiana. Another night we had farm-fresh lamb from Tennessee. One of our travelers brought artisan beer from Tennessee much like the artisan beer from Charleville vineyard that we sell at Sappington. Fitz's Root Beer from St. Louis was the most popular drink over-all.
Throughout the reunion, we kept the table and counters filled with bowls of fresh-cut veggies and fruits. It was a tasty feast filled with health-giving antioxidants.
With twenty-five people eating for six days, we made a big dent in the local produce of several states and enjoyed each other's company immensely. Between meals we frolicked in Current River. Everyone felt great even though the temperature was hovering around 100 degrees most of the time. That fresh food keeps people feeling young and active.
I'm already planning the food for our next reunion. I feel certain it will be as good as this year's-and that's saying a lot.
Posted by fresh food nancy at 12:36 PM 3 comments: